When young Mary decides to take a shortcut through the gypsy camp, her life will be forever altered. An excellent example of the German kunstmärchen, or “literary fairy tales,” The Elves tells the story of a young girl who learns both the wonders and the perils of encountering these magical beings. It’s a story of friendship, loss of youth, prejudice, and broken promises.

Biology professor Theron Tademus cares about his work above all else, certainly more than friendship or romance. In fact, he doesn’t really like people in general. While spending his summer holiday in the mountains of North Carolina, Tademus meets a beautiful, mysterious young lady named Elva who is unlike anyone he’s ever met. Try as he might, the professor can’t stop thinking about her. Elva, though, maybe more than she appears, and Tademus may be in serious danger. Is the professor’s love of science any match against the elf trap?

Vitamin C: A 500-Year Scientific Biography from Scurvy to Pseudoscience

Vitamin C: A 500-Year Scientific Biography from Scurvy to Pseudoscience is the compelling story of the history and science behind vitamin C.

Vitamin C begins with scurvy, which afflicted Europe for four hundred years and killed millions. The reasons that a disease whose cure was known from the outset persisted over that time are at once baffling and familiar, and these trials eventually lead to invention of the science of epidemiology. Author Stephen M. Sagar MD then chronicles the discovery of vitamins at the beginning of the twentieth century, a story that encapsulates the rise of a scientific approach to nutrition but with surprising twists and turns. As vitamin science became more acquainted with the mainstream, scientist Linus Pauling reached new heights of fame and influence by popularizing the practice of taking megadoses of vitamin C to prevent colds – a claim that was not necessarily backed by data. This kickstarted the growth of the $40 billion vitamin and supplement industry, which has since prospered all while ignoring science.

This unique and engrossing narrative reveals how medical science functions in the real world and how it has changed over the centuries. Featuring swashbuckling sailors, arctic explorers, penny-pinching bureaucrats, academicians with clashing egos, and intrepid scientists working in malaria-infested jungle laboratories, the story of C is in many ways the story of how science gets done (and undone). From the trial and error of early explorers to the scientific breakthroughs made by biochemists and the birth of the modern supplement industry, this revelatory book tells the story of how cherished beliefs, self-interest, and politics often intertwine with scientific progress. 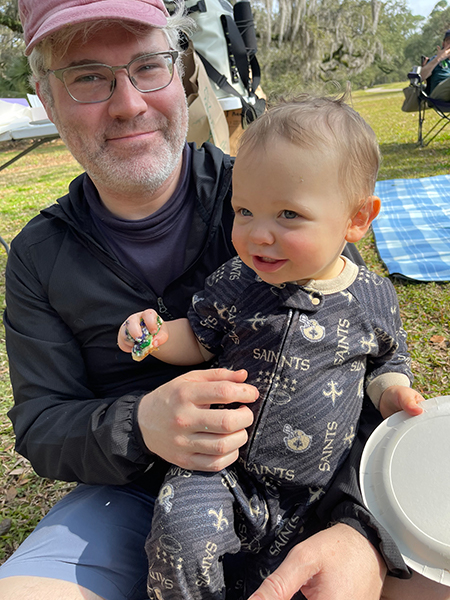 After graduating from Lafayette College with a B.A. in English, Jeff Wren attended New York University, where he received his M.A. in Cinema Studies. He later returned to New York University to obtain his J.D. After working as an attorney in Manhattan, Jeff eventually moved to New Orleans, where he now lives with his wife, son, and two dogs. A lifelong lover of the written and spoken word, Jeff is excited to publish exceptional audiobooks through his company Ground Cherry Press LLC.